Click HERE to sign up for all Garth Brooks/Plus ONE residency announcements including information on new dates. 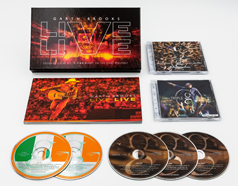 Commemorating his Las Vegas Residency, Garth Brooks LIVE LIVE is comprised of a custom book and 5-discs filled with over 50 of Brooks' most beloved live recordings as well as newly released recordings. The set includes the FINAL release of his celebrated Double Live Album. Not just the original 1998 edition, your Double Live album might be the 25th Anniversary Edition of Central Park or the 25th Anniversary Edition of Croke Park. Also includes, Triple Live, featuring over 25 tracks from the record-breaking Garth Brooks World Tour including brand new, never-released recordings and three new covers. The brand-new boxed set can be pre-ordered now for arrival before the holidays so fans can celebrate the live legacy of Garth Brooks until they can see him LIVE at his Vegas Residency in 2023.

All registered fans who are also verified will be equally eligible to participate in the Verified Fan Presale. However, if demand for tickets from verified fans exceeds supply, verified fans may be selected at random to participate in the presale. Due to the limited quantity of tickets available for the Garth Brooks Presale powered by Ticketmaster Verified Fan, they will be available on a first-come, first-served basis and are not guaranteed. No purchase necessary to register.

By continuing past this page, you agree to our terms of use.